History of Color On The Creek

The Carroll Creek Linear Park (Phase 1), which traverses the heart of downtown Frederick, was formally dedicated in 2006 at a cost of approximately fifteen million dollars. The park capped a sixty-million-dollar flood control project built in response to recurrent flooding – including extensive damage from storms in 1972 (Hurricane Agnes) and in 1976. 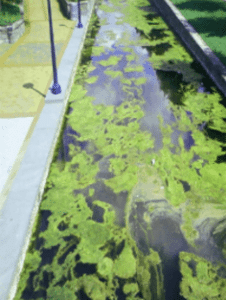 The flood control project and linear park have been very successful in bringing economic development and opportunity to downtown Frederick. Unfortunately, water quality issues in the creek, predominately manifested as recurrent algae blooms throughout the summer months, had detracted from the project. Design elements of the creek leading to slow water flow, excessive nutrients entering and accumulating from the upstream watershed and full sun exposure had created a “perfect storm” for algae growth. The increasing algae concentration reduced water clarity and had created large, unsightly and often malodorous masses as the algae floated to the surface and decayed. (See photos from August 2012 bottom left and more recent image from August 2015 lower right).

There are a number of techniques used to limit algal growth including use of algaecides, increased water flow and sunlight deprivation. The latter can be attempted through the use of biologic inhibitors and water dyes which make water less transparent thus limiting the sunlight necessary for photosynthesis and algae growth. Color On The Creek, through the introduction of select plant materials, shades the water to achieve that same goal. Lilies and lotus plants, which have very large floating pads and aerial (in the air) leaves were the primary plant varieties used to shade and cool the creek water. Over 40 varieties of plants were employed in the mix to create interest and variety including Thalia, pickerel rush, water irises, cattails, variegated sweet flag and soft stemmed bulrush. Although most of the plants are hardy perennials, tropical (annual) plants were also chosen to provide night blooming interest, height above the water’s surface, unusual shapes as well as vibrant blue and purple colors not typically available in perennial plants. The tropical varieties typically provide significantly more surface coverage of the water due to their very large and often interesting variegated floating pads. An additional bonus is they bloom at rates far in excess of most perennial varieties as well.

In early August 2012, a small water garden of approximately thirty potted plants was installed on crude cinderblock pilings in Carroll Creek. The test site allowed us to evaluate the growth of a variety of plants and to judge public reaction to the garden. Critically, the test garden aided us in planning for our eventual expansion including the design of mobile but sturdy custom metal plant stands which are required for placing the potted plants at optimal depths in stable position above an irregular rock strewn creek bottom.

In September 2012, after a formal go ahead from the City of Frederick, “Color On The Creek” a non-profit 501(c) 3 was established as a subsidiary of the Friends of the Carroll Creek Urban Park. Design and fabrication of metal plant stands, planting scheme design and fundraising efforts followed in parallel through the late fall and winter of 2012/2013.

In early April of 2013, the initial 380 metal stands were placed in the creek according to plan. Later that month, and in mid- May, the garden was established with over 100 volunteers potting and placing over 1,000 perennial and 150 tropical plants in the creek. The garden now has approximately 4,000 plants in 450 containers and extends well over 1/4 of a mile in length while covering nearly 30,000 square feet of water. While not a goal, we believe it to be the longest planted water garden in the world. 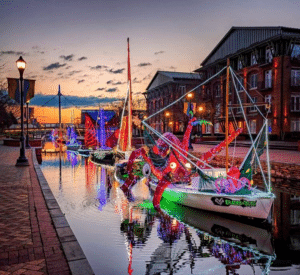 Kudos to Adam Brockett for the above Vote For Your Boat image!

Sailing Through The Winter Solstice 2020

The armada was successfully launched on Saturday November 21st. Please take a look at the launch process: Frederick News Post Launch and the launch as filmed by Kristin Kremers.  This year's solstice event is an awesome display of our communities' collective creativity and talent. There are 20 boats this year in the creek! There's also a lovely article about the display on onlyinyourstate.com.

We've launched! There is a lot of excitement about the voyage this year. There are five new teams that worked hard to join the fleet in the water and four additional land sharks as well. The armada is at 20 boats + 4 landlocked boats, 24 in total. Many boats from last year’s fleet were either replaced entirely or have undergone major revisions. Check out our new look for this year’s fleet! Despite COVID-19, "Sailing Through the Winter Solstice 2020 / COVID be Damned" is a very special and needed event.

Here is the list of boats this year by location:

In an effort to share the awareness of the boats on the creek, we have created an exclusive yacht club for creek enthusiasts and their friends.  Purchase your Yacht Club items here.  All proceeds sweatshirt sales will help fund Color on the Creek and "Sailing Through the Winter Solstice."